Shopper decisionmaking, as explained by a horse named Hans

How shoppers make decisions along the path to purchase has long been a complicated matter. Traditional decision tree approaches do not fully demystify the process. Our Decision Paths framework is a new approach for understanding shoppers’ choices and has a myriad of applications, including driving implications for:

Born in Germany in the early 20th century, Clever Hans was a horse that became famous for answering math problems. People came from all over to ask him questions like "What's the square root of nine?" and Hans would answer by stomping his hoof three times.

A 1911 study by biologist Oskar Pfungst showed that Hans answered correctly as often as 89% of the time… when he could see the person asking the question. However, when he couldn’t see his questioner, Hans’ success rate plummeted to 6%.

Pfungst demonstrated that the horse was responding to the questioner’s body language. As Hans stomped closer to the answer, the questioner would look increasingly happy, and Hans would stop stomping when he judged the questioner to be peak excited. If Hans couldn’t see the questioner, he stomped his hoof to guess randomly (still kind of impressive). Clever Hans wasn’t trying to fool anyone. He was just trying to make people happy. His audiences were deluding themselves into believing his “answers” were telling them something they weren’t.

The Status Quo: Decision Trees Are the New Math Horse

It seems ridiculous that people so willfully jumped to the wrong conclusion. Unfortunately, jumping to conclusions is human nature. It has explained bad conclusions from the Flat Earth model to Dewey Defeats Truman to Crystal Pepsi to Qwikster.

Marketers who jump to conclusions without uncovering the true drivers of shopper decisions are making the same kind of mistake, and traditional algorithmically-derived decision trees offer a great opportunity to misinterpret data. These trees leverage purchase data to identify correlations between purchased products. The algorithms tend to show that items stocked next to one another are the best substitutes for one another and should continue to be stocked next to one another. The current shelf layout is evaluated using the current shelf layout.

Algorithmically-derived trees don't offer a full picture of shopper demand. Determining assortment and shelf layout implications without talking to shoppers is like asking a horse how much of a tip to leave for dinner: it’s easy, but not likely to yield the best results.

Enter our Decision Paths framework, which provides a rigorous interrogation of the drivers of purchase. Across a series of tradeoffs, shoppers identify what benefits drove their choice. Those drivers are then prioritized, creating a series of analytically-derived "Paths" rooted in real shopper choices. In the simplified snack food example below, we see a path defined first by the choice between Sweet vs Savory, then by Meal vs Snack, and finally by Healthy vs Indulgent. 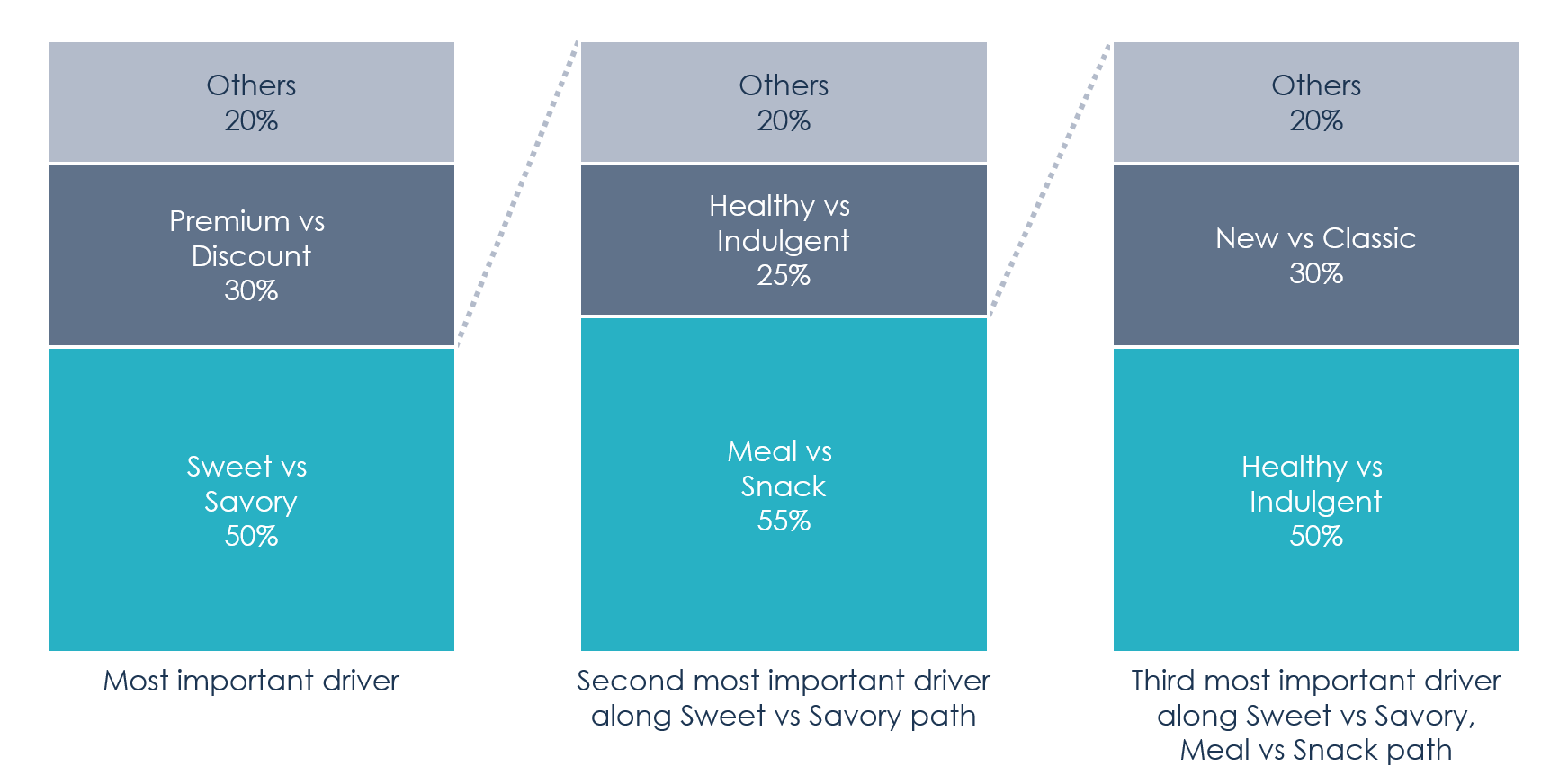 Using these paths, we gain an actionable understanding of what shoppers along distinct paths demand more - and less - of. For example, shoppers along one path may desire a more curated assortment; along another, they want broad assortment. This analysis helps determine how much variety is useful in different parts of the aisle.

Typically, a single path proves dominant within any given retail context; this path provides the organizing construct that suits the plurality of shoppers in this context. However, the dominant path typically varies across distinct channels and retailers, leading to nuanced, actionable implications for different retailers. For example, the dominant path at Whole Foods may prominently feature a split between Organic and Conventional offerings. The dominant path at Walmart is more likely to prioritize other splits (e.g., value, brand, flavor). For this reason, the organizing construct at these two retailers should look quite different.

In a recent engagement, we helped a food manufacturer derive decision paths that explored sales within non-tracked channels, representing new-to-the-category insight into how consumers make decisions in a space where traditional algorithmic approaches could not be applied. Together, we identified the pain points in shoppers' path to purchase and found resounding evidence of unfulfilled demand for multiple categories of food that our client manufactures, bolstering their sell-in stories with key retailers.

This is an extremely powerful forward-looking framework and is simple enough for most organizations to execute. A robust Decision Path framework can be built, and retailer-specific strategic implications synthesized, within a matter of weeks, serving as a substitute or complement to algorithmic insights.

We’re here to help you explore how a Decision Paths framework can help your organization. Let us know if you’re interested in learning more… straight from the horse’s mouth.

Michael Thompson is an Associate Partner with The Cambridge Group and leads the firm’s Pricing and Promotion Center of Excellence. He has experience building demand-driven growth strategies across a variety of categories, including consumer packaged goods, financial services, human resources, social media and technology.